You are at:Home»Videos»Communication between self-driving cars key to improving traffic flow

Research from the University of Cambridge has demonstrated how driverless cars can communicate with one another to keep traffic moving smoothly, leading to an overall improvement in the flow of traffic of at least 35%.

The research team programmed a small fleet of miniature robotic cars to drive on a multi-lane track and observed how the traffic flow changed when one of the cars stopped.

However, when the cars were communicating with each other and driving cooperatively, as soon as one car stopped in the inner lane, it sent a signal to all the other cars. Cars in the outer lane that were in immediate proximity of the stopped car slowed down slightly so that cars in the inner lane were able to quickly pass the stopped car without having to stop or slow down significantly. 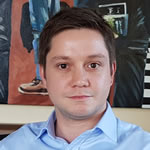 Dan joined UKi Media & Events in 2014 having spent the early years of his career in the recruitment industry. As deputy editor, he now produces content for the Autonomous Vehicle International website and supports the editor with the publication of each exciting new issue.