You are at:Home»News»Sensors»Plus plans to integrate Teledyne FLIR thermal cameras into its autonomous trucks

The US self-driving truck technology firm Plus (formerly Plus.ai), is working with Teledyne FLIR on a development project to explore the addition of thermal cameras to the sensor stack used with Plus’s Level 4 autonomous driving technology.

Plus takes a multi-modal sensor approach and currently uses lidar, cameras and radar to provide trucks powered by its autonomous driving technology with a 360° view around the vehicle.

While the current system offers improved safety compared with a traditional truck, thermal cameras add another layer of perception that is particularly useful for heavy trucks that traverse the country in low-visibility and high-contrast conditions. These can include: night-time, shadows, dusk or sunrise; direct sun or headlight glare; and challenging scenarios when fog or smoke is present due to environmental conditions.

Depending on configuration, thermal cameras can detect and classify pedestrians at distances of up to 250m (>820ft), which is much farther than the reach of typical headlights.

They can also provide another layer of perception around the vehicle, particularly helpful when the vehicle is backing up or when being overtaken by an ensuing vehicle.

“You can never be too safe when it comes to equipment you put on a heavy truck,” said said Tim Daly, chief architect of Plus. “Combining thermal cameras with our other sensors would bring an additional margin of safety to our system. Our research pilot will not only assess the technical performance but also consider cost and scale requirements in order to potentially add this to our product roadmap.”

“We are excited to be working with the team at Plus as they explore the integration of thermal cameras into their current sensor suite, creating even safer autonomous commercial vehicles,” added Paul Clayton, general manager of components, industrial technologies segment at Teledyne FLIR. “By combining thermal imaging with visible light cameras, lidar and radar, Plus can create more comprehensive and redundant systems, allowing these vehicles to more readily detect and classify objects and humans on the road to help save lives.”

Plus also recently completed a driverless Level 4 truck demonstration on a highway. During the demo, the driverless semi truck was operated without a safety driver, teleoperator or any other forms of human intervention.

The demonstration was conducted with a special permit on the newly built Wufengshan highway in the booming Yangtze Delta region, with Plus being the first company to be granted such a permit in China. During the demonstration, the driverless truck drove safely and smoothly in typical highway traffic. 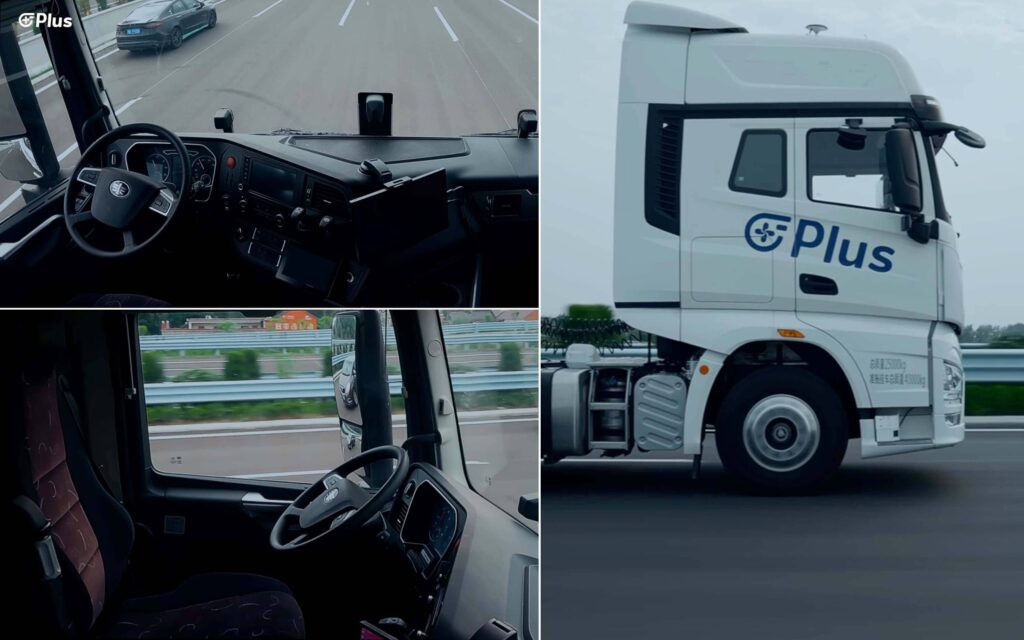 “The driverless demo highlights the ability of our Level 4 autonomous driving technology to enable driverless highway operations in a semi truck. The demo shows the safety, maturity and functionality of our technology, and we are excited to continue to work closely with our suppliers, fleet customers and OEM partners to further develop, test and refine a driverless product for commercial deployment,” said Shawn Kerrigan, COO and co-founder of Plus.

Plus expects to launch pilot operations of a fully driverless truck for use in a dedicated environment in 2022.

Plus is also applying the Level 4 technology used in the driverless demo to deploy a commercial driver-in product for semi trucks called PlusDrive. PlusDrive can either be a standard configuration of newly built trucks or added to existing trucks in order to help make long-haul trucking safer, more efficient, more comfortable, and better for the environment.

PlusDrive uses advanced sensing technologies, including radar, lidar and cameras to provide a 360° sensing system. Data gathered through the sensors help the system identify objects nearby, plan its course, predict the movement of those objects, and finally control the vehicle to make its next move safely. Plus’s advanced multi-modal sensor system solves vibration and long-range camera drift problems for mass production as well as adequately addresses adverse weather and lighting for commercial deployment.

Customers of PlusDrive include some of the world’s largest fleets. The first customer delivery of PlusDrive started in February 2021 and mass production of the FAW J7 L3 truck powered by PlusDrive is expected to start in the third quarter of 2021.

Headquartered in Silicon Valley and founded in 2016, the company first demonstrated its driverless Level 4 heavy truck operation expertise during a demo at the Qingdao port in April 2018.

With over 20 years experience in editorial management and content creation for multiple, market-leading titles at UKi Media & Events (publisher of Autonomous Vehicle International), Anthony has written articles and news covering everything from aircraft, airports and cars, to cruise ships, trains, trucks and even tires!